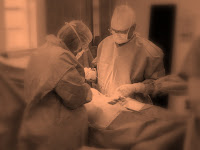 If you only read the headlines last week, on the Rise in Iraqi C-sections, with rates reaching 79% in private hospitals, you may not have seen this:

"Officials at private hospital say it is not greed that's driving the C-section boom but the patients themselves."
The Associated Press report continues: "Dr. Aseel Ahmed Salman
from the al-Jarrah private hospital in Baghdad acknowledged the higher risks of C-sections but said many patients are uneducated, don't know the risks and just want the process over with. "They cannot endure pain. They want the easy way. They are not even encouraged by their own families or mothers," to have a vaginal childbirth, she said. "The mothers of these wives, most of the time, come to us crying and requesting Cesareans for their daughters because they cannot endure seeing their daughters in pain.""

That's not to say that there isn't a problem with the country's c-section practice, if doctor Ulfat al-Nakkash's description of events is representative of what's going on:

"When I accompany my own patients to private hospitals, I see disastrous things there... "The gang-like medical staff there fight each other over patients to do C-sections and get the money."

As always, it's very difficult to get at the truth of what's happening inside any hospital maternity ward, and to know for sure just how many women wanted their cesarean birth and how many did not.

Other countries are not very good at keeping an accurate tally of wanted and unwanted c-sections in their own hospitals either, so in that sense at least, perhaps we shouldn't be so shocked that there's controversy in Iraq too.
Posted by cesarean debate at 1:33 AM