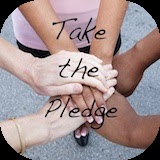 I came across this rather intriguing website recently, and decided to sign up. Its founder, Elizabeth Flora Ross, has written a book called 'Cease Fire', which she describes as a "call to end the war between women", and The Mom Pledge aims to eradicate cyber bullying among moms. Here's what she writes:
"The so-called “Mommy Wars” are going stronger than ever.
Blogging and social media have added a new dimension to the conflict, and competition among moms has spread far beyond the traditional work or stay at home debate.

Today, every parenting decision a mother makes is open to attack, and there are no winners.
There seems to be no end to the topics that can generate controversy.
A recent poll of Mom bloggers revealed 76% had experienced or witnessed cyber bullying between moms on online."
Why Did I Join?
One of the reasons I joined today is because I've certainly witnessed cyber bullying by some women who are so determined to impose their own views and ideas on others that they resort to typing insensitive, frenzied attacks.
For example, I've read tentative, frightened posts by tokophobic women looking for support, and responses akin to telling them to shut up, put up and stop whining about it.
I agree with Elizabeth when I say that some women in this world (real and cyber) really need to work harder on respecting each other's life choices.
Posted by cesarean debate at 1:15 AM

Thank you for joining The Mom Pledge Community! When I saw your link, my first thought was, "I bet this is a group of women that knows a thing or two about cyber bullying." There is a lot of ugliness out there. We are trying to spread respect, understanding and acceptance of the different ways women parent. Appreciate your helping to spread the word!