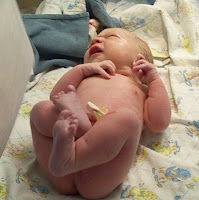 The Daily Mail has gone with the headline "Big push for home births: Too many babies are being born in hospital, say doctors", and The Guardian, We need a cultural shift on homebirth - If women are to opt for homebirth over hospital-based care, we must teach them about the benefits of choosing to stay at home.
Unfortunately, according to RCOG's president Dr Anthony Falconer, some media reports may be getting the wrong end of the stick following its maternity "shake-up" proposals yesterday.

I heard Dr Falconer stress on BBC radio yesterday that the RCOG is NOT suggesting more home births, but rather, more births in midwife-led centers.

But what RCOG may have failed to recognize is the fact that women perceive the SAME risks (see below) with both, which is why its proposals are not feasible.

Speaking to Vanessa Feltz on July 14, Dr Falconer said: "I should stress that we’re not, we’re not advocating going back to a huge increase in homebirths...


That is certainly not our line at all, and some of the media publicity today is misquoting us in terms of saying homebirth. I think they’re interpreting that we support midwifery-led care units, saying that that is analogous to a homebirth, which it isn’t."
The fact is, that whether they're deemed low risk or high risk, the overwhelming majority of women WANT to give birth in hospitals, where emergency care is IMMEDIATELY available should they (or their babies) need it.
It is an insult to the intelligence and preferences of these women to try to convince them that staying away from doctors is the 'safest' way to give birth.

Indeed it's a national disgrace.

Stop lying to women in a flawed attempt to save a few pounds, and stop wasting time and money on proposals and schemes that will risk the lives of mothers and babies.

Yes - the majority of low risk pregnancies can have a spontaneous vaginal birth outcomes - but until RCOG, the RCM or the NCT can produce evidence of a fail-safe method of identifying (before labor) which women will fall into this 'low risk' category, let women give birth where they want to.

In its report introduction, RCOG states:

"The services should not only improve women’s experience by including them more in decision making (‘no decisions about me without me’1) but also improve services for all, based on some already excellent good practice. Services must also be cost-effective."

It then states that its proposals are underpinned by principles and values, including:
"women should be at the centre of their own care"
"care should be provided closer to home (accepting this principle may require women to travel to access very specialist care)"

I might be wrong, but given the fact that so few women currently choose to give birth any distance from hospital, I don't foresee a huge increase in the number of women who are willing to accept the possibility of travelling to access specialist care.
Posted by cesarean debate at 7:06 PM