The Biggest Change in Women's Rights since they got to Vote 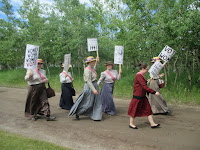 One of the many supportive doctors I've worked with over the years sent me an email today that got me thinking.

He (yes - a male doctor) had written, "it's a major breakthrough. The biggest change in women's rights since they got to vote" (in response to the NICE Guideline news).

I realized that just because we take the vote for granted as a good thing now, this doesn't mean that the women who campaigned had much support at the time - and least of all from other women.

Which is precisely what I've been finding over the past few days.


Many women (and particularly those who've already had their babies) are blogging, tweeting and phoning into radio shows to voice their disapproval of maternal request cesareans.

And perhaps this is not so shocking, especially when you consider what a massive change in public knowledge, understanding and awareness of the facts now needs to occur in order for some people to better understand why NICE has revised its recommendation.

It has been accepted for so long that vaginal delivery is the norm, and that when it comes to childbirth, natural is next to Godliness, some see women who choose a cesarean as being rather closer to the devil incarnate (e.g. selfish, posh, wasting NHS resources).

Women - Their Own Worst Enemies

This view is of course disconcerting at times, but I am comforted by the fact that at the time of the Suffragettes' campaign to ensure women were given the right to vote, not only was there strong opposition from men, but moreover, some of the most vehement condemnation of their ideas came from women.

For example, some said that they didn't even want the right to vote and would never choose to use it if they had it; others felt that it might upset the established balance of things - a woman's natural place was in the home.

And then there was the argument that I think matches particularly well with the view that pregnant women shouldn't be involved in cesarean decision-making at all - this should be the sole charge of medical professionals:

"The vast mass of women are too ignorant of politics to be able to use their vote properly."(*)

Even Queen Victoria herself was not at all enamored by the campaign.

According to Lytton Strachey's biography 'Queen Victoria' (cited here), "In 1870, her eye having fallen upon the report of a meeting in favour of Women's Suffrage, she wrote to Mr. Martin in royal rage--

"The Queen is most anxious to enlist everyone who can speak or write to join in checking this mad, wicked folly of 'Woman's Rights,' with all its attendant horrors, on which her poor feeble sex is bent, forgetting every sense of womanly feeling and propriety.

"Lady--ought to get a GOOD WHIPPING. It is a subject which makes the Queen so furious that she cannot contain herself. God created men and women different--then let them remain each in their own position.

"Tennyson has some beautiful lines on the difference of men and women in 'The Princess.' Woman would become the most hateful, heartless, and disgusting of human beings were she allowed to unsex herself; and where would be the protection which man was intended to give the weaker sex? The Queen is sure that Mrs. Martin agrees with her.""

Also, as I've written about before, there are many, many people who fear the consequences of NICE's draft recommendation - what will the world do if more women decide to choose surgery?

What will happen if we empower women, provide them with all the facts and allow them to make an informed choice about how they want to give birth (at least those who want to make a choice - remember that many women are content with a more paternalistic approach in maternity care)?

No one can know for sure, and only in the future will we be able to look back and make a judgment call on whether NICE has done the right thing this week.

But personally, having communicated with the women that I have, I'm convinced that there is no other ethical way forward than to support maternal request, and I commend NICE for taking this historical step forward.
Posted by cesarean debate at 12:39 AM

Congratulations - you have worked very hard on this issue for a long time. Now to hope that practice matches guidelines (...they really ought to keep statistics on the number of women who actually achieve their planned delivery method...)...