A Rare but True Risk of Planned Cesareans 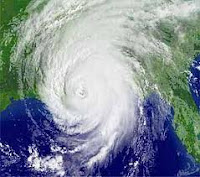 War, Hurricanes and any other Disruptive Force.
I read two things this week that made me decide to write about this risk.

That is - if you want or need to have a cesarean birth, you really are reliant on the availability of your obstetrician, other supporting medical staff, and a hospital with a functioning OR.

Obviously, as a statistical risk, this is likely a very small one
for the vast majority of women and I'm not suggesting it's a risk that should be discussed during every antenatal discussion.

However, in the interests of balance, and ensuring that I highlight all cesarean risks, I do believe that this deserves at least some attention.

Firstly, on Wednesday, the Reuters report Libyan capital faces health disaster as aid held up quoted Rosa Crestani of MSF, who said, "There are clearly shortages of life-saving medication and equipment. There are no antibiotics and instruments for life-saving surgery."
She continued, 'the most urgent cases included not just those wounded in the fighting, but also civilians such as women needing caesarian sections.'

And then tonight, I noticed the following Tweet from (I believe) a reporter at ABC News:
Mikaela.A.Conley.-ND@abc.com needs women who have planned cesarean sections this wkd in areas where the hurricane is expected.

This made me remember seeing pregnant women in some of the Hurricane Katrina footage and thinking how especially frightened they must be, and although the Tweet below illustrates that it's not just planned cesarean births that are put in jeopardy when disaster strikes (since any woman planning a vaginal birth may need emergency surgery), I still feel that the point is worth making here on my blog.

Katie.A.Moisse@abc.com needs pregnant woman on the East Coast due to give birth during Hurricane Irene.

I can only hope that help reaches the women and babies who are affected by world events such as these - and that it reaches them in time.
Posted by cesarean debate at 1:00 AM