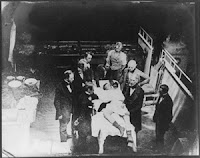 Quite by chance this evening, I came across this fascinating bioethics blog on the history of anesthesia, and it really struck a chord with me regarding birth choices.
Religion and ideology have historically hampered women's access to pain relief during labor (from chloroform through to modern-day epidurals), but I had no idea that such obstacles stood in the way of the very first surgical pain relief relief too.
According to the blog (based on a Boston Globe report on 7 June 2009), Prior to October 16, 1846 (the date of the first operations conducted under anesthesia) our view of the person seemed inseparable from the concept of pain: “the vast majority of religious and medical opinion held that pain was inseparable from sensation in general, and thus from life itself”. Thus, while the technology was available, the doctors and the patients were not ready for medicine: less painful medical care “required not simply new science, but a radical change in how we saw ourselves”.

When I think about the language used by many birth advocates (and I've talked about this before), I often feel as though they might easily be talking about some form of religious experience when they describe the birth process.

And I have heard some say that the way we are medically tampering with our bodies natural physiological processes during birth, we might have a lasting negative affect on mankind.

But while I don't dismiss these comments out of hand (I actually agree that rising rates of cesarean birth can have negative as well as positive repercussions), I can't help but draw a parallel between the instinctive resistance to women like me choosing prohylactic surgery that's out there, and the instinctive resistance to pain relief prior to the mid-19th Century.

We often hear the words, "women have been giving birth since the beginning of time", so what's so different now?

I'll tell you what's different now - Everything is different.

I honestly think that we're sometimes in danger of living in this little bubble of complacency, in an age where we take medical advances for granted, and like to pretend that that 'we're not so different from our ancestors really'.

Well perhaps we're not so different in some ways (our pelvic floors haven't improved any in terms of withstanding a fetus' often clumsy passage through), but advances in modern medicine - and in particular, cesarean surgery - have meant that our exposure to insufferable pain, grief and loss has been markedly reduced.

I sympathize with every woman who has an unwanted cesarean birth, and I respect every woman who chooses to give birth naturally - I only ask that these same women do not campaign against a choice that embraces medical intervention, and is forever grateful for it.
Posted by cesarean debate at 12:14 AM