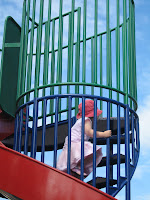 More accurate and relevant information on c-sections is needed - begins my comment on the HealthDay News article, C-Section Rate in U.S. Climbs to All-Time High: Report:
Year after year, we see the same report - cesarean rates hit all-time high. And year after year, the very simplest action is not taken in the USA, which would help us to better understand exactly what's going on and where - so more can be done to target and reduce the most dangerous surgeries, and leave the others well alone.
What am I referring to? Compiling data that is more relevant and precise to different birth plans and outcomes.

Why, when many other developed world countries have been doing this for years, do U.S. hospitals not separate emergency and elective cesarean data as standard
(although they do at least separate primary and repeat cesareans, which is good)? And within the elective cesarean group, why not monitor gestational age at birth - together with an indication (medical, obstetrical, maternal request or a combination of more than one indication) - as standard?

If we then look at the national data and see that prophylactic maternal request cesareans (for example) are being carried prior to the ACOG and NIH guidelines of 39+ gestational weeks, then they can be targeted and improved. Similarly, we can identify where the highest rates of emergency cesareans are occurring, and try to better assess what is leading to these and what can be done to reduce them (since emergency surgeries are associated with the greatest risks).

Also, the cesarean data should include the mothers' BMI and maternal age, for example (this will help analysis of maternal deaths, for example).

This comment does not purport to be a comprehensive outline of everything we need to know, but I hope that it at least illustrates that any general discussion or debate about 'cesarean rates' in a country the size of America, without more specific data informing it, is just an exercise in floundering around in the dark, going round and round in circles.

Ask two different doctors and you'll get two different opinions on c-section rates - what the country needs is more facts. Who, what, where, why, when and how. This will equip us to improve maternity services for more effectively than a league table of percentages that simply pit individual State 'c-section versus vaginal' birth rates against each other.

The lives, and quality of lives, of babies and mothers are at stake if we target the wrong cesareans in an arbitrary rate reduction drive. Let's get the right information and move forward from there.
Posted by cesarean debate at 10:45 PM

Thank you for the post. Do you know of any US-based studies that divvy up c-sections this way? Also, do you have a citation or title for the older HealthGrades report?

There are a few studies, and probably the best place to point you to is the 2006 NIH State-of-the-Science Conference Statement on cesarean delivery on maternal request:
http://www.ncbi.nlm.nih.gov/pubmed/17308552
The NIH panel looked at a whole range of studies in order to reach their conclusions.

The HealthGrades study I refer to in my post is:
21 July, 2003 HealthGrades Quality Study First-Time Preplanned ‘Patient Choice’ Cesarean Section Rates in the United States
http://www.healthgrades.com/media/english/pdf/Patient_Choice_Csection_Study_July_2003.pdf