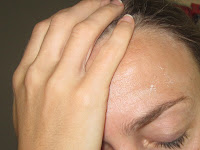 Following yesterday's blog on tokophobia, I came across another article today, this time by the BBC, with some positive news for women.

Dr. Malcolm Dickson, a consultant obstetrician at Rochdale Infirmary, is quoted as agreeing that cesareans "are often the best option for women who are terrified of delivering their baby for months beforehand.

"Birth phobia is a dreadful thing. You can't quantify it but I see women physically change and relax when I agree to a section.

"Lots of anxiety in the patient can lead to an emergency section during labour anyway."

And the Birth Trauma Association, which says many tokophobic women contact them after being told that they can't have a cesarean, insists that "whatever the cause of a woman's fear, it is vitally important they choose how the baby is delivered."

Furthermore, in light of pressure to reduce cesarean rates in the NHS, Maureen Treadwell, a founder of the BTA's, insists that "there are no grounds for argument" with this issue.

"Caesareans don't cost much more than a vaginal birth - only £84. It's not a bad hit if a woman who is really afraid doesn't want to give birth vaginally."

As others have commented on this blog, given the costs associated with antenatal counselling and postnatal counseling for birth trauma, it's entirely feasible that in fact a planned cesarean - if desperately wanted - is likely more cost effective than a trial of labor.
Posted by cesarean debate at 11:43 PM