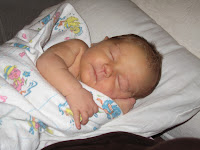 New guidelines published this week state that for low risk planned cesareans, "the need for vigorous resuscitation is no different from that which occurs in an uncomplicated vaginal birth", further supporting the case Dr. Murphy and I make in our book.

The New Zealand Newborn Services Clinical Guideline, 'Paediatric Attendance at Low Risk, Elective Caesarean Deliveries', reviewed by Malcolm Battin, states [my bold]:
"The Newborn Service provides paediatric attendance at deliveries where concern exists for the welfare of the fetus, or where immediate neonatal problems are anticipated. In addition, the team may be urgently called to attend to babies who develop unexpected problems following delivery.

Although acute compromise at the time of birth cannot always be predicted there is agreement that elective caesarean deliveries are low risk. The Royal Australasian College of Physicians Policy on Paediatrician Attendance at Caesarean Sections1 is very clear in the statement: “The evidence indicates that with regional anaesthesia, in the absence of fetal distress or other significant perinatal factors, the need for vigorous resuscitation is no different from that which occurs in an uncomplicated vaginal birth.2,3,4,5

The RANZCOG also recognizes “elective caesarean section under regional anaesthesia, in the absence of risk factors for fetal compromise has no higher incidence of fetal compromise than that associated with vaginal birth”6.

Accordingly, the NICU registrars and nurse specialists do not need to attend elective caesarean deliveries unless there are additional complicating factors including General Anaesthesia or Non cephalic presentation, which may be associated with an increased risk of requiring resuscitation.

If there are anticipated to be factors that increase risk of adverse neonatal outcome then the obstetrician should inform the neonatal team of these factors when requesting neonatal attendance.

As previously, emergency access to a full Neonatal Intensive Care team can be provided urgently if required via pager or mobile phone."