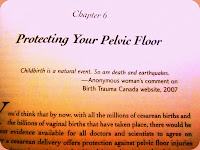 I don't want to speak to soon, but momentum seems to be building once again, which might see a move towards greater balance in the way women are informed about different birth plan risks.

Five years after NICE CG132 guidance said maternal request cesareans should be supported, you'd be forgiven for thinking it had never been published in many areas of the country.

And though that in itself is bad enough (informed women who choose a caesarean still being denied this legitimate choice), it also impacts on women who have no particular birth preference and simply want to fully understand their (and their baby's) individual likelihood of risks and benefits with different birth plans.

So it was very welcome news this week when the New Scientist published Doctors should warn women about the real risks of childbirth, and one of its reporters, Clare Wilson, wrote the accompanying article, UK doctors may officially warn women of vaginal birth risks.

You see, Clare Wilson is one of a growing number of journalists who 'gets it'.

When I first contacted her in July last year, she'd just published Stop glossing over the risks of natural birth to cut caesareans, and within months, I'd sent her a copy of our book, Choosing Cesarean, A Natural Birth Plan.

Then just this week, another two journalists told me they're reading it too, and I can't emphasise enough what a shift this is even from as little as 4 years ago (when our book was published, not a single journalist reported on or reviewed the copy we sent to them).

Somehow the world didn't seem quite as ready back then for what our book says; the 2011 NICE guidance on maternal request was being misrepresented and misinterpreted, and 'caesarean choice' (with its perceived elevated cost) didn't juxtapose at all well with austerity cuts in the NHS.

But the Kirkup Report on Morecambe Bay, the Supreme Court Judgment (Montgomery v Lanarkshire Health Board) on birth autonomy, and a plethora of other important developments (more new research and evidence on pelvic floor impact, more focus on late term stillbirths, more MPs noticing the associated ballooning costs of litigation cases with planned vaginal deliveries, and more parents - and even coroners - realising that cesarean rate targets and the 'push for normal birth at any cost' can lead to avoidable deaths and injuries - to name but a few) has changed all that.


It even appears that RCOG might finally be forced into having to consider issuing patient information on the risks of vaginal births, something RCOG's president David Richmond says is proving “terribly sensitive and difficult”.
I'm sure it is...

After all, so many medical professionals have staked their entire careers, reputations and published research on the uncompromising premise that vaginal delivery is unequivocally superior to cesarean delivery.

When writing our 'Choosing Cesarean' book, I included the following quote by the American poet and writer Ralph Waldo Emerson (1803-1882) on the subject of vaginal delivery risks, and it came to my mind again this week when reading these latest news articles:

"Every violation of truth is not only a sort of suicide in the liar, but is a stab at the health of human society."

As the penny starts to drop, and once women finally learn that they have not been told the truth about the risks associated with vaginal delivery - long after the truth was known in medical circles, and long after organisations like my own had campaigned for this truth to be communicated - there will be very serious questions to be answered by the very professionals empowered to provide (or withhold) the full spectrum of maternity care.

The ramifications of symphysiotomy in late 20th century Ireland are still being felt today (and those poor women didn't have nearly the same record of care/ paper trail/ access to timely legal services that women today are more likely to have), and I foresee serious legal ramifications going forward (as I'm sure RCOG now does) if the lies don't stop soon.

But while the evidence mounts that 'Information must come before Ideology', I am under no illusion that ideology is going to disappear from maternity care without a fight...

and 12 years into my fight, it's still a case of 'every inch (towards informed choice) counts'.

In 2016 obstetrics remains stubbornly adverse to providing full disclosure and informed consent. Think there is no misogyny in obstetrics? Think again. The harm done to women by the refusal to admit they were wrong to say planned vaginal births are safer and cheaper than planned cesareans is astronomical and the longer they continue with this bogus claim the more credibility and trust they lose. Turning that ship around will, indeed, be hard for them but the longer they wait the harder it will be.

Your book was a fantastic resource for me when I was fighting the NHS to be "allowed" a c section for my second birth after numerous issues following my first vaginal birth two years previously. It took 30 weeks and (thank god) a very supportive GP and community midwife to push obstetricians at my local hospital to finally get a c section agreed to.
I think it's crazy that in this day and age that there is so much misinformation surrounding vaginal birth- why on earth can't we all have a reasonable discussion? There are risks involved with both- here they are, here are the facts: which do you prefer? Fairly simple.

Thank you very much Andy; I appreciate you taking the time to comment and I'm pleased you found our book so useful.
Your final comment hits the nail on the head; informed choice is precisely what is needed.