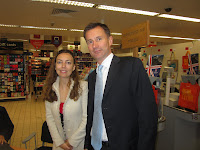 Just a week before the story, Jeremy Hunt: I'll be guided by science, appeared on BBC News online, I met with the Health Secretary in his South West Surrey constituency to talk about maternity care issues in this region, and also nationally.
Albeit a very brief meeting, I have been corresponding with Mr. Hunt MP in writing since June 2011, andit was very reassuring to hear him say that he has taken on board my concerns about the way maternity care is being structured and delivered. On October 12, Mr. Hunt told me that he was still to meet with the RCOG and RCM but would be doing so soon, and so I specifically asked him to express the importance of ensuring that maternity user groups other than the NCT (and other smaller groups that agree with the NCT's views) are better represented than they currently are when it comes to government funded research, recommendations, policy making and the production of NHS publications.

I specifically highlighted the contrast between last year's NICE Caesarean section guideline (with numerous stakeholder organisations' involvement), and the heavily criticised recommendations for CCGs that were published by the RCOG, RCM and NCT in August.
In the BBC report Mr. Hunt is quoted as saying, "I believe that my decisions as health secretary should be based on science and should be evidence-based and driven by evidence... I will follow the scientific advice."

And even though this statement was in response to questions about homeopathy and abortion, I am hopeful that perhaps - just perhaps - the new Home Secretary will prove willing and able to look beyond what others perceive as acceptable and "normal" outcomes for all women and babies, and support a maternity care system where "choice" really does deliver choice, and where short- and long-term health (and £ cost) outcomes are compared according to the original birth PLAN - as recommended by NICE.
Posted by cesarean debate at 11:50 PM