The French Government Wants To Tone My Vagina 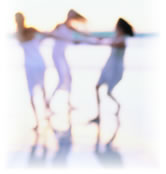 This Slate article by Claire Lunberg is worth reading alone, but just as importantly, read the comments posted below, and in the Huffington Post version of the article, posted a few days later.
It's all about French postnatal care for the damage to a woman's pelvic floor that can happen during vaginal birth, something Pamela Druckerman also wrote about in the New York Times back in 2007.

We don't have anything like this in the UK or the U.S., at least not for the average woman (private medical care may differ), and what resonates most with me are the comments from women who, like so many others, echo the words, "No one told me this could happen."

"I was so scared that at the age of only 21 I would now be wearing adult diapers and would do so for the rest of my life. Despite all the books I'd read during my pregnancy about the birth and delivery and the recovery, none of them mentioned the loss of sensation I experienced, let alone the lack of control. The doctor chuckled at my predicament, smiled, and said, "Not to worry. That's perfectly normal. You'll be able to feel when you have to urinate soon." How is it normal if I'd never read about it in any of those books, in any of the experiential anecdotes? Six weeks later, my brief incontinence was not mentioned, was not noted, and I was certainly not told that I could strengthen those muscles. I've peed when I sneeze ever since. It's been 21 years of sneezing and peeing."
Posted by cesarean debate at 9:13 PM