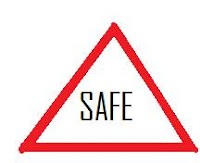 Because it dangerously raises expectations of what a woman's birth might be (or have been), when the truth is that birth has never been safe.

And while I understand and sympathize with women who feel that medical intervention destroyed their birthing experience, and while I agree that where women want to do things more naturally, they should be supported wherever possible, I think it's important that they are not promised that Mother Nature and/or their own bodies will guarantee perfectly safe outcomes.

Yes, women are designed to have babies, but like it or not, it's a flawed design.

Yes, the majority of babies can be born safely via natural means, but a significant number will require medical intervention in order to optimize safety. And that's before considering the balance of risks and benefits in terms of the woman's own morbidity.

In many ways, Ricki and I are campaigning for very similar birth choices - but at opposite ends of the birth spectrum.

She lives in a country where women are able to request a planned cesarean birth and for the most part, have their informed choice discussed and supported in a respectful way (medical insurance coverage allowing of course - the big sticking point in the U.S.), whereas I live in a country where women will be supported 100% in their decision to have a home birth or intervention-free birth in a birth center or hospital.

And ironically, while women fight to get a VBAC in the U.S., we have cases of women here who are actively encouraged to have a VBAC, and then left to get on with the most intervention-free birth possible - at the cost of human life (read more here).

Believe me, it is as distressing for women in this country, who desire a surgical birth, to be refused their birth choice too. Not because surgery is the 'experience' they want, but for most, quite the opposite.

They don't perceive birth as a personal experience in and of itself; it's simply a means to an end - the birth of their baby. Their requirements for post-birth satisfaction are made up of a different set of criteria to women who desire natural birth (and both should be respected).

And most importantly,  many believe that a planned cesarean is the safest way for their baby to be born and for their own bodies to be protected.

And there it is - that word safe again. And I tried so hard not to use it.

(On a serious note, I repeat - I do not advocate that a planned cesarean is a 'safe' birth choice. There are undoubtedly serious risks involved that each woman must be informed about. However, I maintain that the exact same statement is true of a planned vaginal birth, wherever and however it takes place.)
Posted by cesarean debate at 8:38 AM